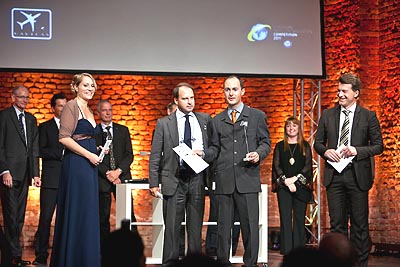 In a spectacular ceremony held in Munich on October 19th, Jordi Santacana, CATUAV director, received the special award from the GSA (GNSS Agency) for the best application based on EGNOS. At the same event CATUAV was also awarded by the CTAE (Aerospace Technology Centre) with the Regional Prize. Both awards, endowed with 30,000 €, assess the innovativeness of the proposed system to integrate mini-UAV flights in controlled airspace. Jordi Salvador, CATUAV aeronautical engineer, has been responsible for this new system to be applied in test phase in mid 2012. Galileo Masters Awards are sponsored by a consortium of agencies chaired by the European Space Agency and aim to promote new applications of satellite navigation. This year’s edition, with 401 projects registered from 49 countries, has been by far the most competitive to date.