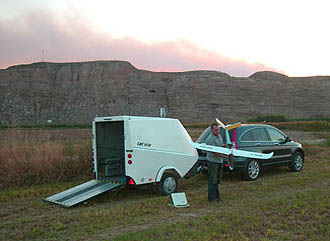 Under agreement between CATUAV, AURENSIS and the Regional Government of Aragon, the urgent supply of CATUAV UAV services was required on August 19, to monitor a forest fire in the military polygon of San Gregorio, Spain. During the night of 19 to 20 August 2009, CATUAV moved a control station and one Atmos-4 unmanned aircraft, which were operational from 06.00 am until 21.00 hours. During this period 4 flights were performed in perfect coordination by radio with the numerous aircraft operating in the area. For the first time in a forest fire emergency in Spain, aerial images were broadcast live via satellite from an umanned aircraft, which allowed the advanced emergency office and emergency center in Zaragoza to follow the evolution of the fire front. The firefighting equipment and personnel included 18 manned aircraft (5 amphibious planes and 13 helicopters), 14 ground crews, 18 trucks and various effects of the UME (Emergency Military Unit), which in total represented more than 300 people deployed in the area. The fire, which ended up charring 6,700 ha., was brought under control by 21.00 hours on August 20, 2009.